skip to main | skip to sidebar

Fabrication Laboratories: Problems and possibilities of implementation in Latin America


Abstract:
Since 2007, Latin America has incorporated a set of emerging techniques promoted under three initiatives: a) from the experience of Master and Doctoral students who return to their home countries and promote their experience, b) from the external academic experience that goes towards the region, and c) from self-learning.
These experiences are developed in an academic area, unlike Europe or the U.S., where they were promoted from and to professional practice, with varying degrees of implementation and effect. Generally speaking, the academic programs of the region lack a policy of inclusion of systematized emerging technologies, and that produces a slow uptake, especially in architecture. On one hand, if educational policies are not stable, equipment investment cannot be stable, and on the other hand, the generation gap between those who promote and those who accept blends into disruption and status quo.
Each implementation in the region produces adverse and complex patterns, replicating existing models and seeking alliances with institutions in developed countries. Thus, there are self-help groups, while others incorporate academic, technical and/or commercial supervisions, in principle through the Center for Bits and Atoms (MIT Fab Lab) and McNeel Associates (Rhino Fab Lab).
In this research, we evidence evolution and implementation processes in Latin America of the three types of initiatives, analyzing the case study in Peru, which together open up the possibility of moving from a phase of experimentation, trial and error to another that actually promotes local innovation and inclusion.

Digital Fabrication and ‘Making’ in Education:The Democratization of Invention by Paulo Blikstein

Towards an identity Digital Fabrication in Latin America (English-Spanish) by Pablo C. Herrera 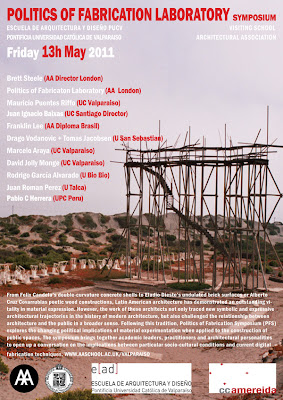 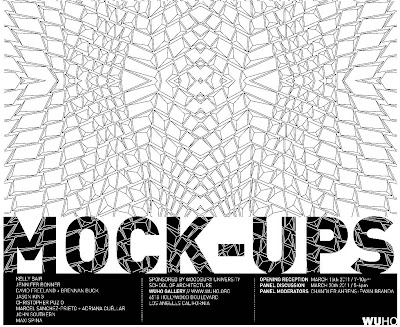 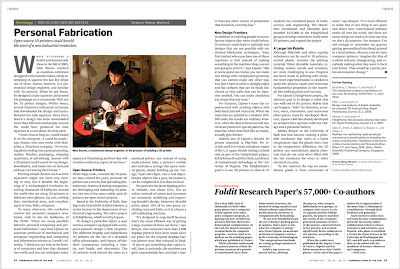 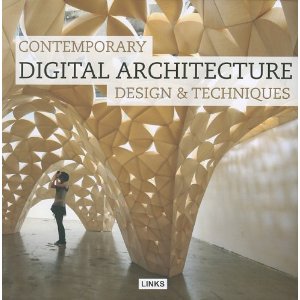 The theme, ’Machinic Processes’, refers not only to new digital fabrication processes, such as CNC milling and 3-D printing, but also to the innovative use of new parametric and algorithmic design techniques. Since 2004 the adoption of these techniques in China has been rapid. The design of buildings such as the Birds Nest stadium would not have been feasible without the use of new parametric modeling techniques and Building Information Modeling software. Meanwhile, although the construction industry in China has relied heavily on manual labor in the past, digital fabrication technologies are beginning to play an increasingly important role in the construction of buildings throughout China, and are set to play an even more significant role in the future. (Source)
West Coast (curator: Elena Manferdini)
UK (curator: Alisa Andrasek)
China (curator: Xu Feng)
East Coast (curator: David Ruy)
Australia (curator: Roland Snooks)
Europe (curator: Marta Malé-Alemany)
Asia (curator: Lisa Iwamoto)
Latin America (curator: Matias del Campo)
International (curator: Francois Roche) 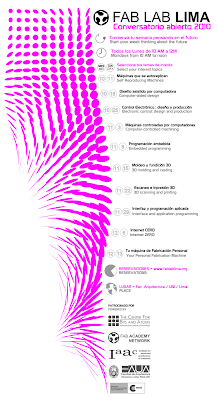 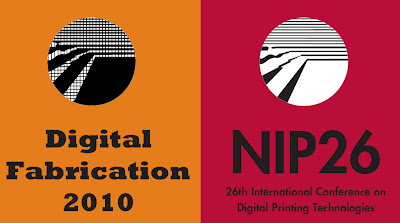 Location: Austin, Texas
History
Prior to being spun off into a "stand-alone" collocated meeting, Digital Fabrication was a technical session within NIP. Held for the first time in 2005, it has been an annual conference ever since.
Scope
Digital Fabrication explores the potential of digital printing technologies with sessions on new applications and materials that go well beyond traditional printing. Digital fabrication techniques have been used for biomedical applications, as well as to produce MEMS and new electronic devices. Conference topics include 2D & 3D functional printing and micromachining; digital fabrication instrumentation; ink jet printing processes; laser patterning processes, direct-write, and integration in printing manufacturing lines; process materials and substrates for digital fabrication; nano-patterning and imprint technologies; prototyping technology; printed sensors, photovoltaic cells, lighting devices, biomaterials, architectural components and electronics and devices; and industrial and commercial digital fabrication.
Since 2005, Digital Fabrication has been held in conjunction with the NIP Conference.
Publicado por Pablo C. Herrera en 10:41 No hay comentarios:

FABRICATE
International Peer Reviewed Conference and Publication,
London, 15-16 April 2011
Deadline 10 September 2010
Central to the aim of FABRICATE is to interrogate and disseminate architectural innovation in design and making practices accross industry and academia. Submissions will be independently blind reviewed by two members of an international panel of experts.
As the conference is seeking to ‘break the mould’ in gathering and publishing innovative built or partially built material, the call for works emphasises a very high standard of diverse visual content to accompany text. It is recommended that submissions include an appropriate range of images including concept sketches, early iterations, CAD and physical models, photography, manufacturing or construction information, scripting, test pieces, prototypes, parallel experiments, final assemblies, artefacts in use, revisions, renovations, subsequent iterations, as well as information on the spaces in which such works were created.
Our online submission system will go online on 9 August 2011. The Call for Work deadline is the 10 September 2011.
Publicado por Pablo C. Herrera en 7:47 2 comentarios:

REPEAT as an international competition is established to foster the creative spirit in the burgeoning field of digital fabrication.
We encourage the generation of cutting edge design proposals for a structure of your design with the only caveats being it be generated and conceived digitally, incorporate repetitive elements, be optimized for relocation and transportation and be produced through fabrication technologies available within Houston, Texas.
judging + criteria: The evaluation of all the REPEAT proposals will focus on the cohesion of the design concept to digital fabrication techniques and methods of assembly. Factoring in these two foundational requirements for the competition, the entrant is encouraged to propose a solution that is both formally challenging in the mechanics and aesthetics of the connections, but also speak to the issues of use and performance. The REPEAT jury is comprised of 5 internationally recognized architects:
Register :: Compete :: Exhibitions :: Lectures :: Projects :: Network :: BLOG :: Poster :: Competition Regulations :: Schedule:
Publicado por Pablo C. Herrera en 21:28 No hay comentarios: 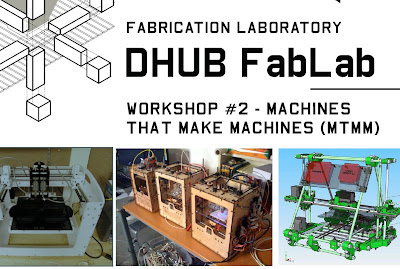 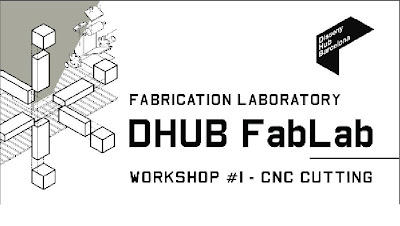 Parásito. from PIG on Vimeo.
Images

Autonomy of Architecture, the impact of file-to-factory on architectural practice

On the 11th of June, a conference will be hosted at the Protospace, which deals with how file-to-factory processes impact architectural practice.
Computational Architecture has a polarizing effect on architecture; on one hand the development of new design tools for architectural conception allow us to deal with more abstract design notions, on the other hand these designs are pushed beyond description, towards definition. Architects such as Kas Oosterhuis ( ONL /Hyperbody research group ), Fabian Schreurer ( designtoproduction) and Fabio Gramazio ( Gramazio & Kohler ) manage to fabricate from such a rigorous architectural definition. Fabian has been writing programs to generate NC code from which architectural elements are produced and in a similar way the members of theDFAB lab ( ran by Matthias Kohler and Fabio Gramazio ) produces the instructions for their brick laying robot. Philippe Morel ( partner in EZCT Architecture & Design Research ) will provide context of this important development in architecture with his lecture “Knowledge, Machines and Autonomy”.
Check out the posters for the event here and there.
Source
Publicado por Pablo C. Herrera en 9:51 No hay comentarios:

CAADRIA 2010 In the next revolution: Digital Building Kits

1. Introduction
A recent article in Wired Magazine entitled “The next Industrial Revolution” should be cause for concern for most people in design and manufacturing fields (Anderson, 2010). Fear of a revolution in manufacturing and design should follow the same concerns we once had over jobs and communication during the internet revolution. The fear is with good reason; so far the internet has shaken the foundation of news organisations and the traditional keepers of information. The United States has seen extermination of many local and international newspapers. Society now trusts information generated by nonexpert sources (blogs) as much as they do expert sources. In many design fields, in particular architecture, the internet has given rise to drafting and rendering industries that generate images and construction documents overnight. (...)
Publicado por Pablo C. Herrera en 18:40 No hay comentarios:

What is a fablab in three words by Sussana Tesconi 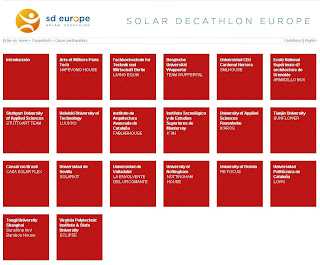 In The Next Industrial Revolution: Atoms Are the New Bits 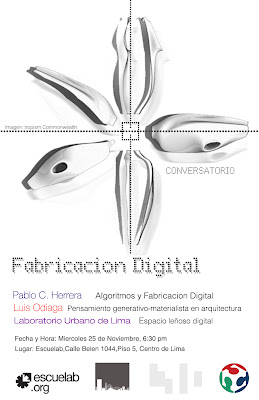 San Juan, Puerto Rico
November 30- December 4, 2009
LaN invites professionals and students alike to attend a 5 day workshop covering Digital Fabrication in Architecture: from intro to advanced. Workshop will instruct on the use of RHINO as it pertains to digital fabrication (ie: rationalizing complex surfaces, preparing 3-d surfaces for various 2-d fabrication methods, creating solid models in Rhino for use with 3-d printing technology, among others). Valuable plug-ins (i.e. RhinoCAM & Grasshopper) will also be introduced and explored. Students will leave with a comprehensive understanding of Rhino and a thorough understanding of current practices in digital fabrication.
More information here
Publicado por Pablo C. Herrera en 19:51 No hay comentarios: 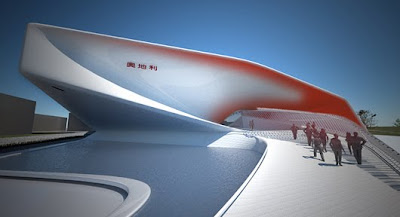 Monday, November 2, 2009. 16:30pm - 17:30pm
Location: Universität für angewandte Kunst Wien
Street: Oskar Kokoschka-Platz 2
City/Town: Vienna, Austria
Prof. Matias del Campo :: SPAN
Topology is the main driving force of the design of the Austrian pavilion, a major area of mathematics concerned with spatial properties that are preserved under continuous deformations of objects, for example deformations that involve stretching, but no tearing or gluing. It emerged through the development of concepts from geometry and set theory, such as space, dimension, and transformation.
The main qualities for the project formed the mainframe of the topological surface. The software output consisted of an extensive array of subtly varying surface conditions. According to their performative behavior the population of over one hundred individual entities where scrutinized for their fitness according to different criteria, such as the potential to fulfill the program, the performance as structural entity and the affect generated by its appearance. This process reduced potential candidates to a very small number. Finally this candidates ran trough a series of algorithms (various remeshings, subdivisions, optimizing the size of the spatial pockets etc.) which eliminated all candidates but one.
This technique can be described as an evolutionary process driven by a series of intensive forces, such as the specific compartmentisation of the pouches, the loadbearing qualities of curvilinear conditions and the allover sensual experience of the space. The numerous explorations and investigations of SPAN into the nature of topological bodies, throughout the recent years, served as basis for the design process. One of the results of these investigations was a series of models only dedicated to seamless, continuous circulations within architectural bodies and apertures in complex curved geometries. These two fundamental architectural conditions, opening and circulation, are discussed in the project of the Austrian Pavilion for the Shanghai Expo 2010 in an alternative way.
The lecture describes the design process of the Austrian Pavilion for the Shanghai Expo 2010, as well as the construction method. The lecture depicts the advanced fabrication methods involved in the construction of the Project, such as the use of simulation softwares, building information modeling and CNC fabrication.
Publicado por Pablo C. Herrera en 6:18 No hay comentarios:

Create your own visitor map!